Lytham Proms is a big deal every year, and this year was no different. What began in 2009 with a single concert night, has now grown into a three-night super event from Friday through Sunday!


Curiousity about the proms begins to build earlier in the week when the crew arrives and begins fencing off the concert area. What is it about fences that makes you want to be nosey? I saw some security crew, but since the fence wasn't fully up yet, I didn't think they would mind me poking around with my camera a bit. I gulped down my last few McDonalds Fries and slurped a now melted chocolate shake before getting out of my car. Classy, I know, but being a super sleuth requires some extra energy! The sun was just beginning to go down a little, but the steel beams were rising up over Lytham Green. It is kind of surreal, in a way, to see this type of construction on the Fylde Coast of Lancashire, because for a second you can almost transport yourself and pretend you are in a city somewhere. Nah...not nearly as much fun as what was happening right before my eyes! 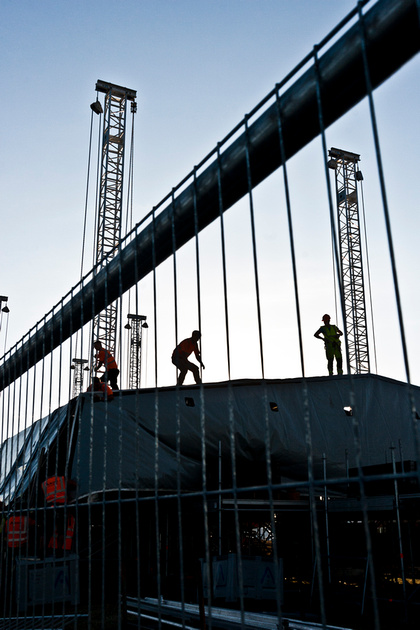 
I started walking around the perimeter of the concert construction site to see what else was happening. What I found was a few curious onlookers, some with cameras. Mostly there were smartphones and the occasional point and shoot. But there were also one or two others that had proper cameras...with very large lenses. This is where the danger music would start to play in a film. As I approached them, my palms started to sweat and it felt like I was about to enter a duel! We walked toward each other with determined steps, yet with a certain wariness in our eyes. We knew full well that we were equally armed. As we passed, we paused long enough to give each other a steely glance, our eyes met, giving this clear, unspoken, "Stay out of my territory!" warning. Then, without speaking, we took a deep breath and continued on our way, sure that we had made our point quite clear.
A bit further around the stage area, I saw some construction workers trying to pull this tarp-type sheeting over the base of the stage. As I walked past, I thought I would try to take a few photos of them hard at work. They looked at me and started laughing and speaking in a foreign language, something that might well have meant, "Ha, ha, ha look at the lady with the crazy red hair and a bit of chocolate milk shake on her chin!"  "Darn!" I thought as I dabbed at my chin with a tissue! I took the picture of them anyway and glanced back with a bit of a smug look on my face.  Maybe if I knew what they were saying, I wouldn't have done that last bit. 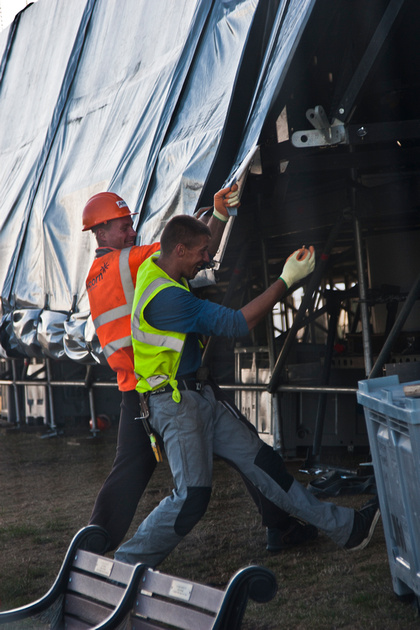 How many construction workers does it take to build a stage?

I continued my walk of discovery, really enjoying watching everything being built from the ground up.  About halfway around, I came upon some entry gates just sitting in the middle of the field, ready to be installed. It is truly amazing how quickly an entire set of this size can be put together, but  even cooler is having it happen up close and personal, right here in Lytham! I peered through the door to the otherside, momentarily imagining crowds excitedly making their way in as the concert was about to begin!! 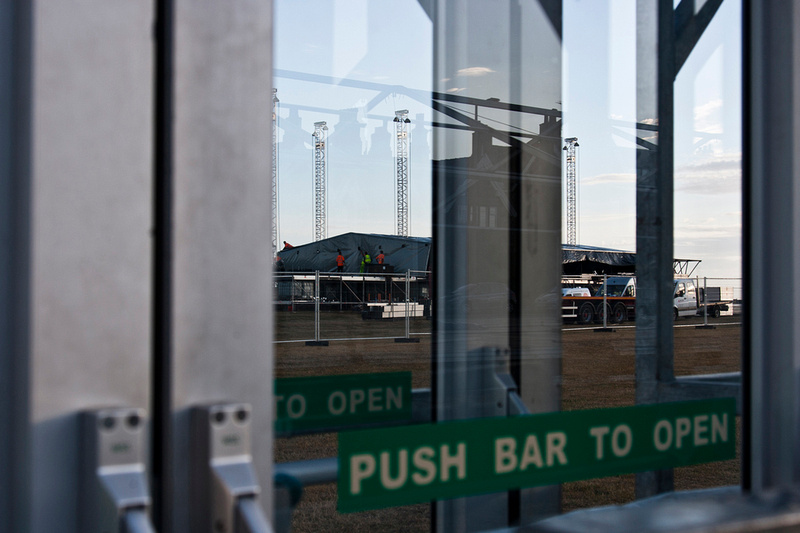 Coming out of my reverie, I could see I had completed my walk around the perimeter of the concert area and was now approaching the group of security officers I had originally seen. They seemed to be watching everything and everyone. I didn't think they would bother me for taking photographs so early on, but I thought it best to include them in my blog just in case! They complied with my request very graciously! I think it is good to point out too, that we certainly have them to thank for having a weekend full of music that was both fun and safe for everyone! 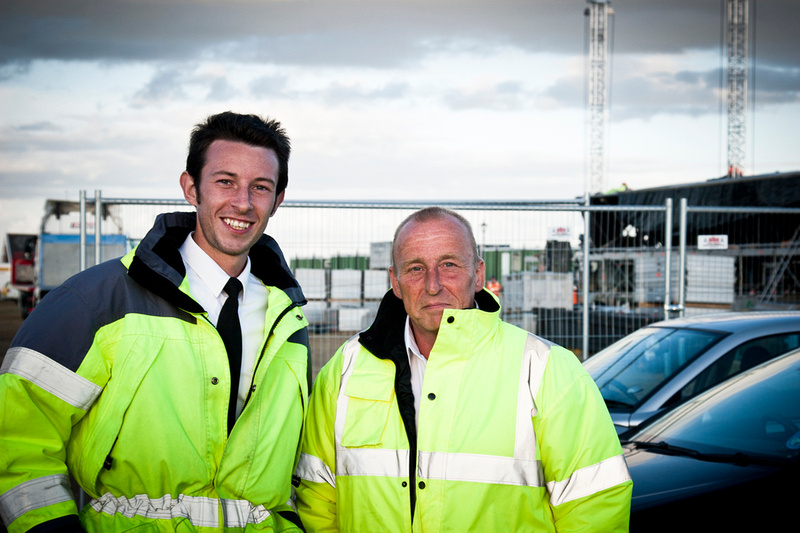 Part of the security crew!  Thanks, officers!

Friday night arrived, and I grabbed my camera gear before setting off for Eighties Night! I didn't actually buy tickets this year, but rather decided to join in the fun that was going on around the outside of the perimeter fencing of the stage, all along the green. Were people really able to enjoy themselves without being inside where they could see everything? 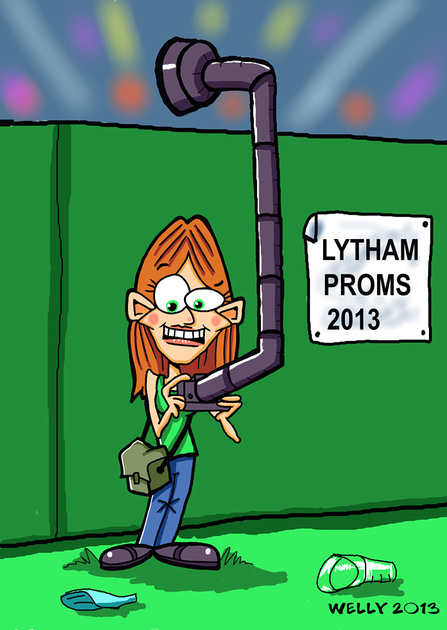 Super Sleuth...view from the cheap seats!

The answer to that question, from my first glance to the last, was a resounding, "Yes!" People all along Lytham Green were dancing, eating, drinking, and singing along to the music! They were having such a good time in fact, that I didn't have to beg anyone to let me take their pictures! Most people just stopped, posed, and smiled as soon as they saw my camera!! 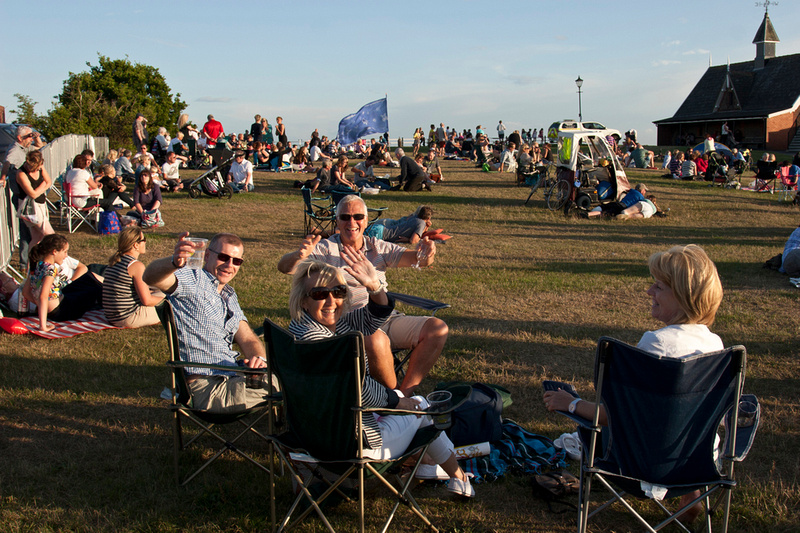 The mood in the air was catching, and everywhere you looked people were taking part in the festivities. There were many dressed up "80's style," although I must say that I do not remember wearing some of the outfits I saw, and I was a child of the 80's! 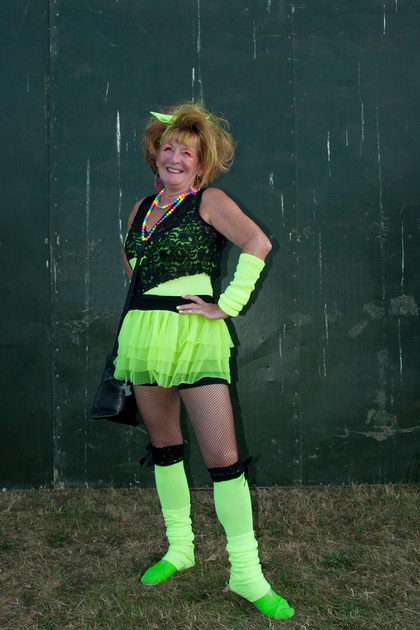 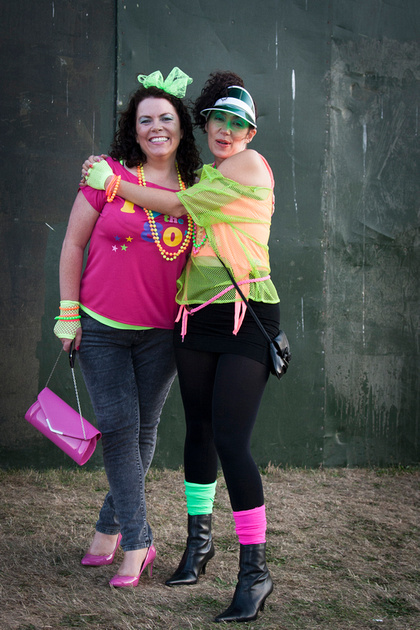 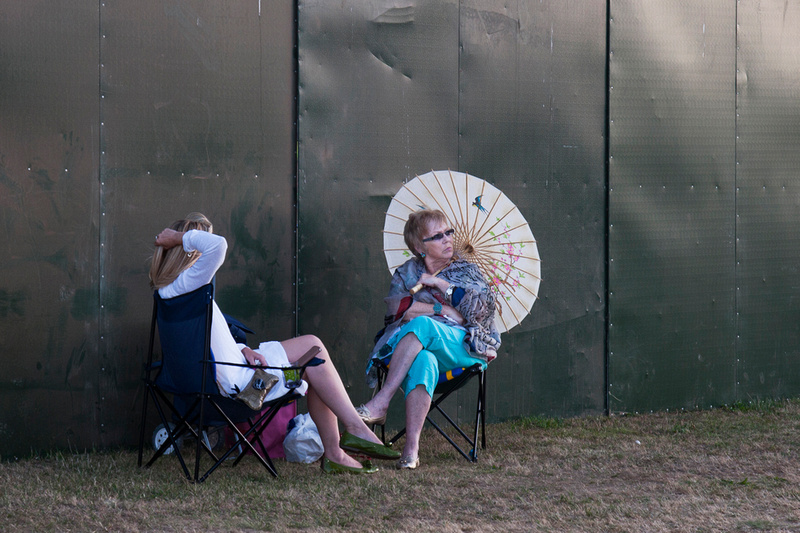 Hmm...not getting this theme at all.  Gosh, I hope that grumpy look wasn't for me! 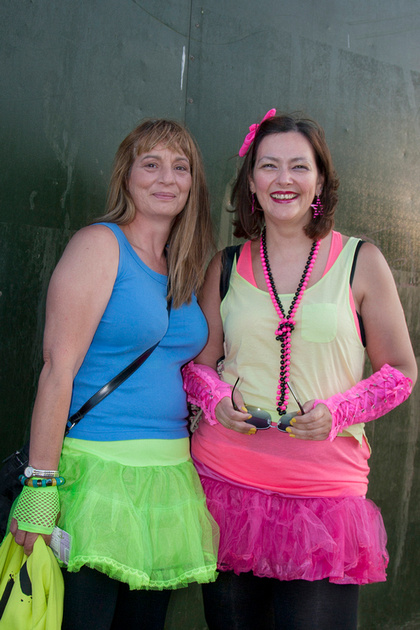 As the music played on through the evening, I sang to the tunes I knew whilst walking around taking photographs. Now that I think about it, I must have looked a bit like a nutter...maybe that's why folks just stopped and posed. I was having so much fun, I could have cared less! Then I came upon these young lads standing on a garden wall in hopes of getting a better look at the concert. I walked up to them with my camera, and they seemed only too keen to have their picture taken. But I made a classic mistake by asking them to pose as if they were on an album cover.
Now some of you are saying, "So what?" Yeah, that just means you were alive when album covers were cool too, but these kids don't remember album covers, so they just started howling with laughter. Next I tried, "CD cover then?"  More laughter.  "Boy Band pose?"  That they understood.  Now why couldn't I have thought a bit quicker on my feet and said I was "channeling my inner eighties?"  Then I wouldn't have sounded like such an old fool!! But it was all in good fun! 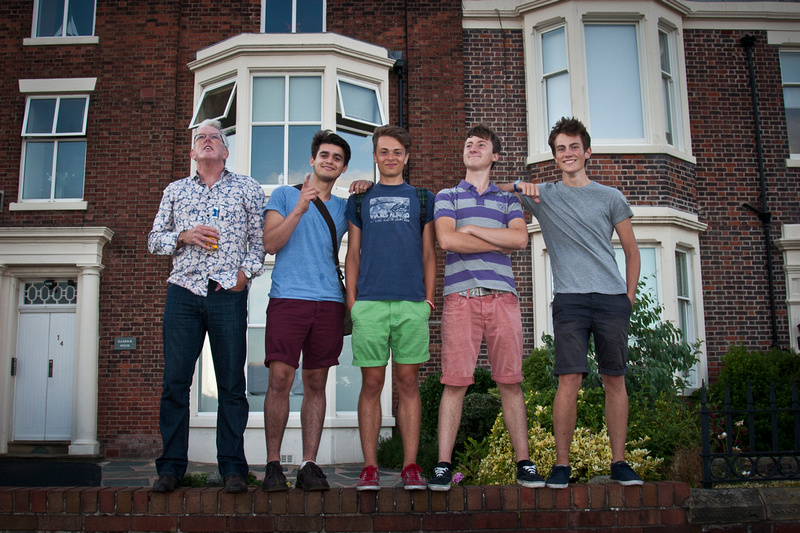 Needless to say further, it was a great night with some fab musicians like Tony Hadley and Jason Donovan, playing the tunes we still know and love!!  Families were out together, playing and enjoying the night together. I even saw someone riding his bike down the street as he was moving to the beat! Next time, I might even dress up in my zebra striped jeans, shoulder pads, and big hair for the occasion!!

In closing, I'll leave you with a photo of Lytham Windmill because what would Lytham Proms be without remembering such a beloved piece of Lytham heritage? 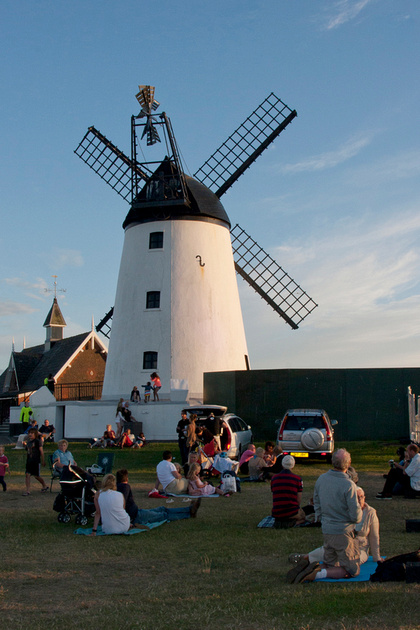 Thank you for stopping by!  I'd love to hear your comments about Lytham Proms!

See you next week!  Thank you Welly, for the fab cartoon!