Today I want to share with you some of my favourite personal images taken in and around Blackpool. Although these are recent pictures,  I remember going there with my family too, and there is much nostalgia mixed in with my adult perspective of its quirkiness! From the donkey rides on the beach, to the heights of Blackpool Tower, family entertainment on Central Pier, cheering on the fabulous acts at Blackpool Tower Circus, the addictive bling and festivities of the Illuminations, and so much more! Where else can you go, locally and take the family for a day of roller coaster rides, followed by splashing in the waves, getting your caricature drawn on Central Pier, then on to the chippy for a takeaway, and end with a drive along the Golden Mile to ooh and ah at the Illuminations? By the time you've seen all the lights, your little darlings should be fast asleep and you can head home for a nightcap with your other half!

Quirky bits aside, the pictures I've selected show both an award-winning cultural element, as well as the more familiar family fun side along the promenade of Blackpool. 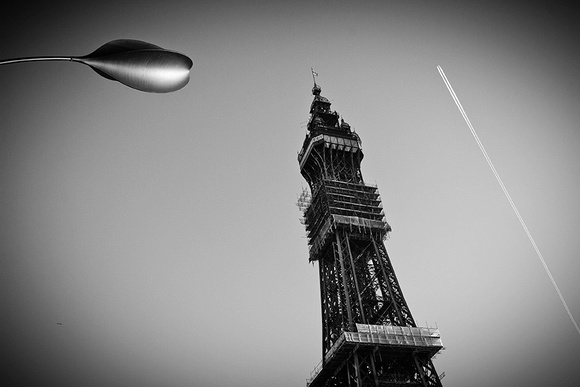 View of Blackpool Tower...feet firmly planted on the ground!

For starters, there are the tall "Dune Grasses" sculptures along the promenade. Erected just in the last couple of years, these sculptures, designed by the London-based creative agency, FreeState, are the tallest, kinetic sculptures in the world. When you stand on the promenade and watch them wave in the wind, it is awe-inspiring. Admittedly, the first thing that came to my mind was whether they could stand in fierce winds or would they suddenly just snap, creating chaos and godzilla-like damage to anything daring to get in its path! This is where I tell my overactive imagination to shut up! The clever designers at FreeState thought of that too, of course, putting the design through rigorous testing in wind tunnels. They didn't stop there, though. They also took a lifesize prototype to the Isle of Wight to test it in "gale force" winds of up to 55 knots, or 110 km/h. 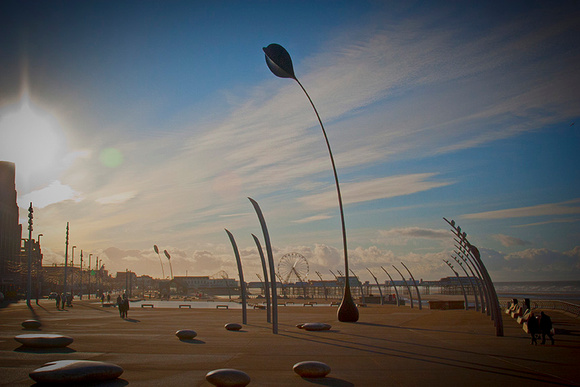 The entire project, from design to testing, to placing it in its final resting place along the promenade, took over four years! The outcome? A refreshing site along Blackpool's world-famous promenade, a kickstart to conversations, both online and by the over 10 million visitors passing by each year, and a coveted Cannes International Design Award for "Design in Public Spaces!" That's a proud moment for Blackpool! The clincher was beating out China, The Phillippines, Belgium, and France for the same award. Here is the YouTube video clip from FreeState of their Cannes Lion Gold winner.

Another now familiar site along the promenade is the already infamous Comedy Carpet, created by artist, Gordon Young in collaboration with Why Not Associates. This sculpture is a fabulous tribute to many legends in the world of comedy, and it took Young over five years to complete it.  Through a sad turn of events, however, a portion of the sculpture was destroyed by Blackpool Council only five months after the celebrated unveiling with comedian, Ken Dodd. From the perspective of Blackpool Council, reportedly, it was all about Health and Safety. The portion of the carpet that was destroyed was considered to be too close to the tram tracks for safe viewing. The argument from the artist's point of view is that there was no apparent attempt by Blackpool Council to follow any form of protocol to notify him or to look for alternatives. 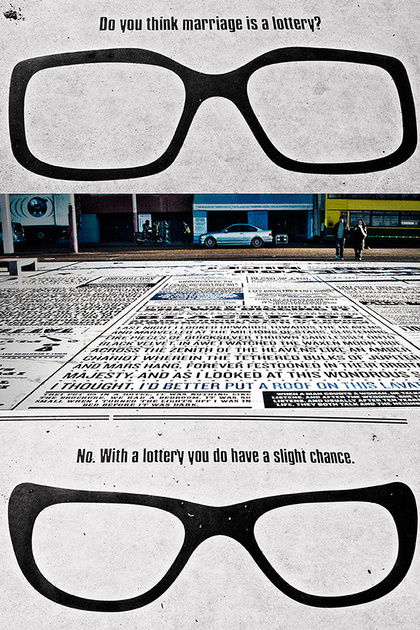 A montage I pieced together from images of the Comedy Carpet, January 2012

In spite of that unfortunate and expensive hiccup, the sculpture, which cost £2.6 million pounds in the making, pays tribute to over 1000 comedians and comedic writers. It even won the Best Public Realm Award of 2011 and the Grand Prix:Drum Design award in 2013. It is an extraordinary work of art and an enjoyable experience!   If you go when there is a comfortable crowd, it's fun hearing people read these famous lines aloud, laughing at them all over again! You can read more about how this fabulous sculpture was created here http://www.comedycarpet.com. 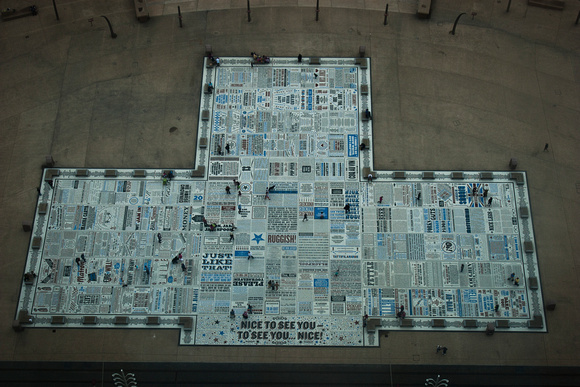 It would be a shame to visit Blackpool and leave out all the colourful sights and sounds you find on Central Pier, especially when you take the family!  Perhaps the rides are not cutting edge engineering, but I personally love that they are well-known classics, especially the ferris wheel! 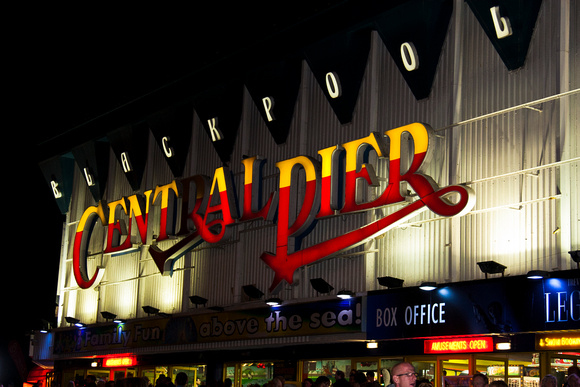 There is definitely a time and place for the highest and zaniest rollercoaster, sitting at the very front so you can see and fully anticipate your high speed plunge into a bottomless pit of winding steel amidst waving arms and delightful screams! But I still love the ferris wheel with the ambience of all the happy noises, cheesey ride "muzak" and colourful lights, combined with an amazing view of it all! 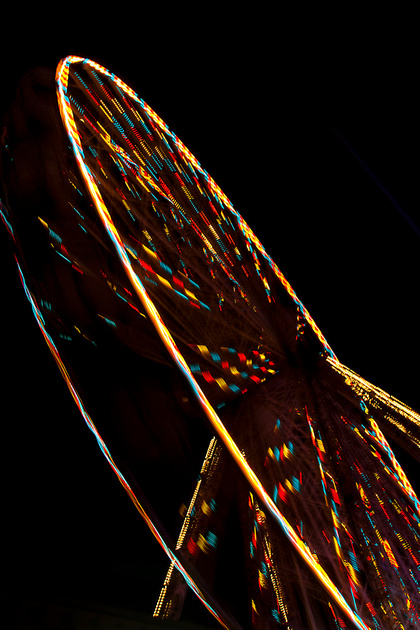 There's nothing like the Ferris Wheel at Night...Central Pier

If the rides aren't enough to entertain you, let's not forget there are all kinds of arcade games where your kids can relieve you of plenty of dosh in a single night, caricatures and face painting, cotton floss (cotton candy for my American readers), and a large assortment of other unhealthy goodies for kids of all ages. 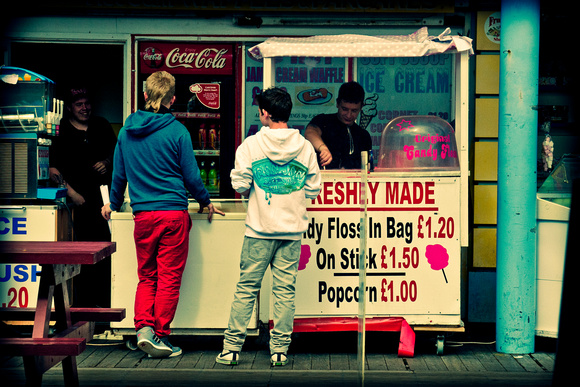 Cotton Floss is an ageless treat!

Last, but not least, we mustn't forget my all-time favourite...BUMPER CARS!!! Seriously, where else can you ram into your other half, irritating teenager, or just some random person over and over again, all the while laughing like the wicked witch of the west and shouting, "I'll get you, my pretty!" without any consequences? 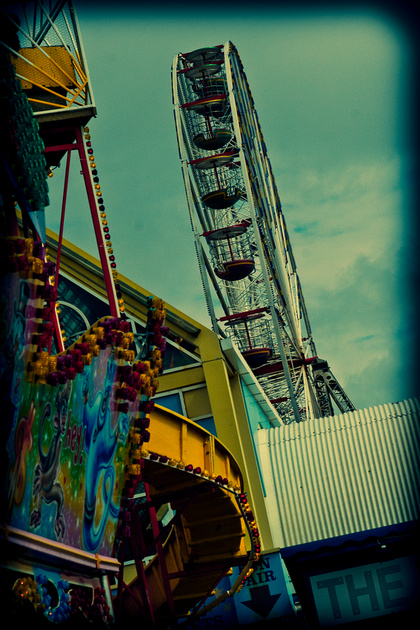 In beween rides on Central Pier 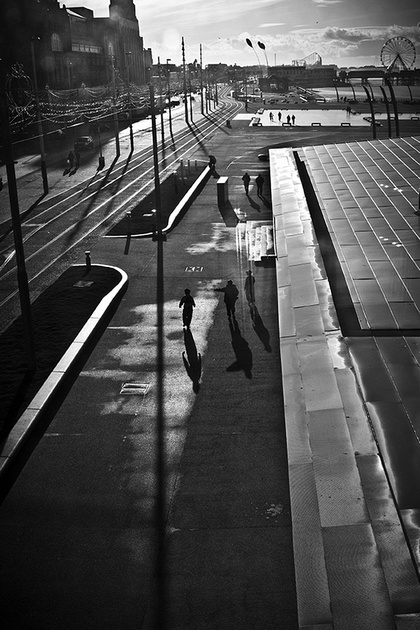 View from the Wedding Chapel...and not a smartphone in site!

Like many of you, I also have personal memories here. I love watching people caught up in a moment when they don't know anyone is there. I love walks along the beach with my boyfriend and his lovable chocolate lab, Alfie, and at the end of the day, I love, love, love the guilty pleasure of ice cream at Notarianni's! American or not, I have to admit that I ♥ Blackpool! 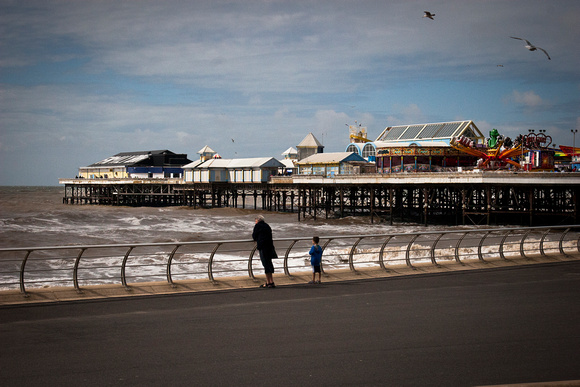 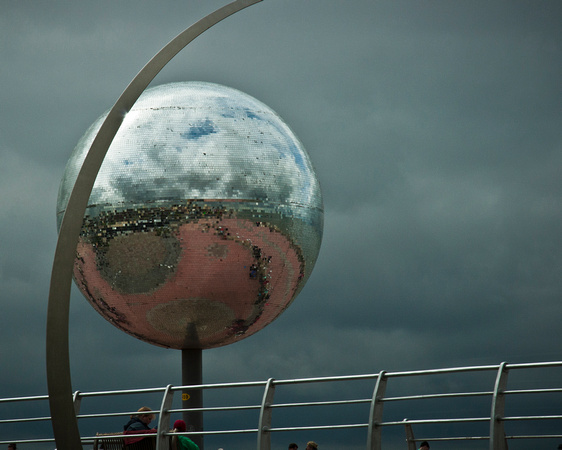 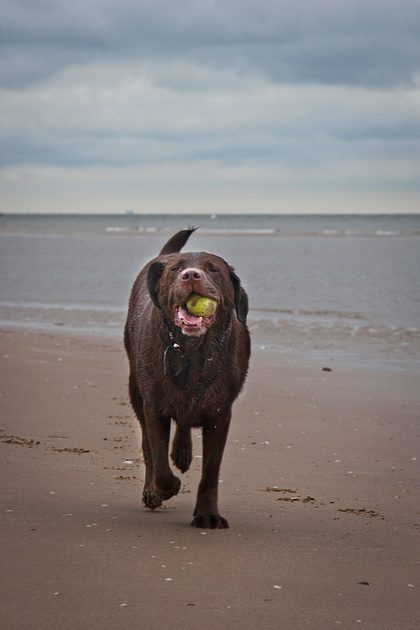 Welly and I love walking Alfie on Stargate beach 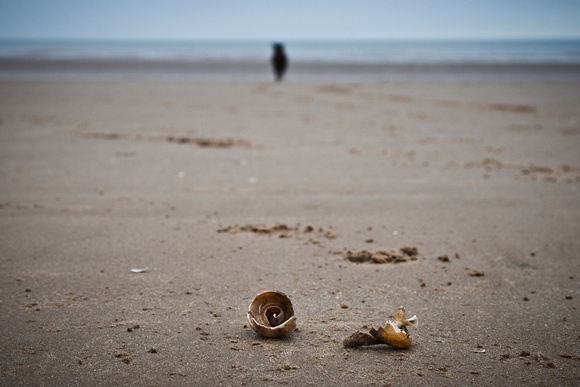 There are so many more pictures to share from Blackpool, I barely got started! There is still the urban art movement, organised by the ever-energetic Robin Ross, but I need a whole post to dedicate to his efforts! Hey Robin, if you read this, we should talk!! A good place to end today, I think, is with these images taken on the night of the Illuminations Switch-On in 2012.

Important note: this picture was captured with a long lens whilst tram was stopped. 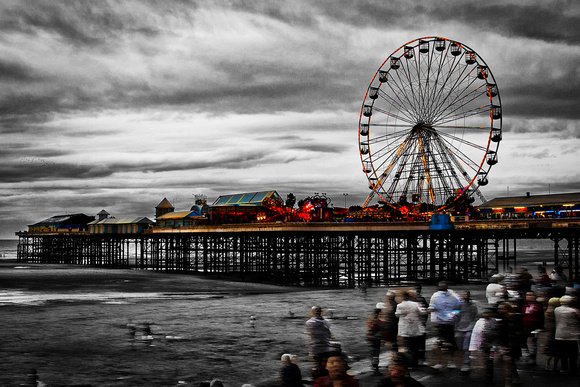 Central Pier on the night of the Illuminations Switch-On, 2012

Thanks for stopping by for a little while...I do love company! If you have any stories about Blackpool you want to share, or if you know someone like Robin Ross that I might want to interview for a future post, I'd love to hear from you. Leave a comment on my blog or email me at [email protected]

Have a great week!