Lytham WarTime Weekend: Reconnecting With Our Past

As the daughter of a USAF Military Officer, I grew up around air bases, airplanes, military life and air shows. Hardly a day went by when we weren't running to the window to try to identify what type of plane was flying overhead. I wasn't any good at it, but my dad couldn't help encouraging me to try anyway. He loves flying, airplanes, the military and his country with a passion. Military men run in our family. My great uncle was a vice admiral in the Navy, My grandfather fought in the Korean War, My father in Vietnam. I have another uncle who went to Vietnam. He was a Major in the US Marine Corp. He didn't die there, but he gave his life for his country, not necessarily because he believed in the politics of the Vietnam conflict, but because he believed in his country. I am proud of my family's military history. Having said that, I was not really all that interested in history in my younger years. If my father reads this, and he probably will, there will be an audible gasp right about now! 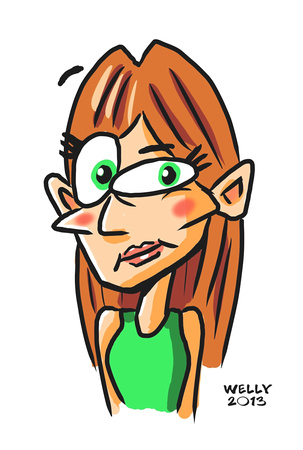 It really isn't my fault, you know. The way history is presented in school is often dry and uninteresting...okay, boring even. Why is that? I believe history presented only in facts is lifeless and impersonal. People, however, make history fascinating! This is why events like the Lytham WarTime  Weekend are so important. We are transported back to another time and place for just a moment, or at least reminded of it with a very visual experience. What I don't know is why so many people want to get involved on such a personal level. As I walked down to Lytham Green early Sunday morning, I decided to see if I could get some answers.

It was just about 0800 when I arrived on the Green. As I started seeking out signs of life, I suddenly got a whiff of the delicious aroma of coffee and sausages cooking around a campfire! I headed in that direction! 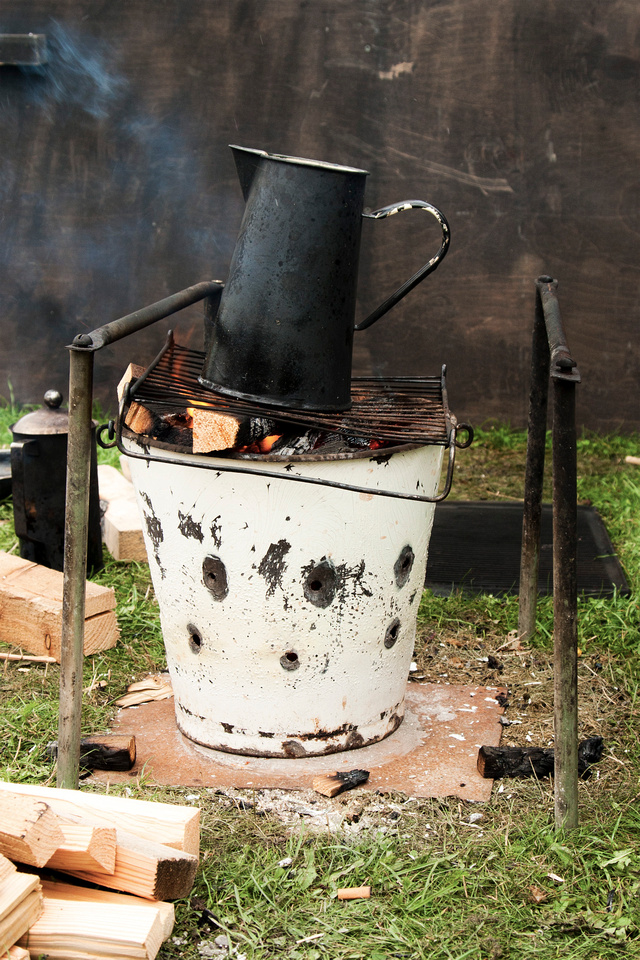 Mmm...Coffee!  Wonder if I could "accidentally" tip some into a cup?

Sure enough, there was a group of men sleepily sitting around a campfire, ready to pounce on the pot of coffee bubbling over the smoky flames. 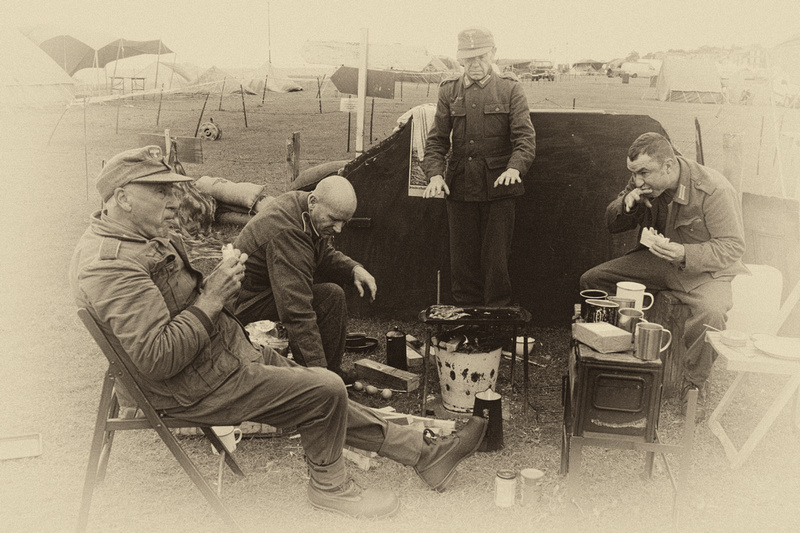 Ignoring my own caffeine impulses, I introduced myself. They seemed surprised by my American accent, but I am getting used to that. One by one, I met each of the reenactment soldiers of the 21st Panzer Division of Germany; a tank troop apparently best known for their role in the North African campaign. The first soldier reenacter I met, called Frank Fazackerley, was wearing lapels with pink piping. According to Frank, this colour represented soldiers who were Panzer Jagers, or tank hunters. There is an entire Waffenfarbe (troop function colour scheme), defining the function designated by the colour of piping a soldier wore on his lapels. You can see them all here. 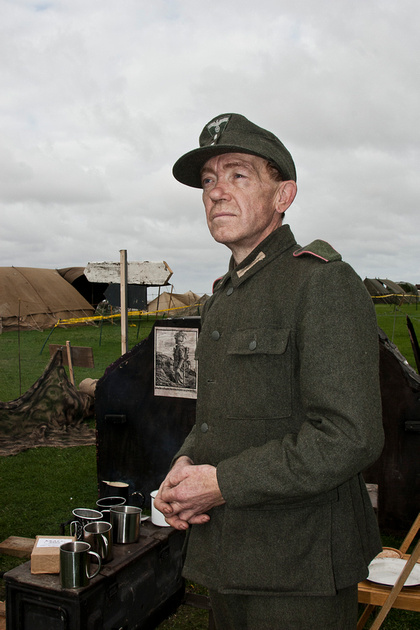 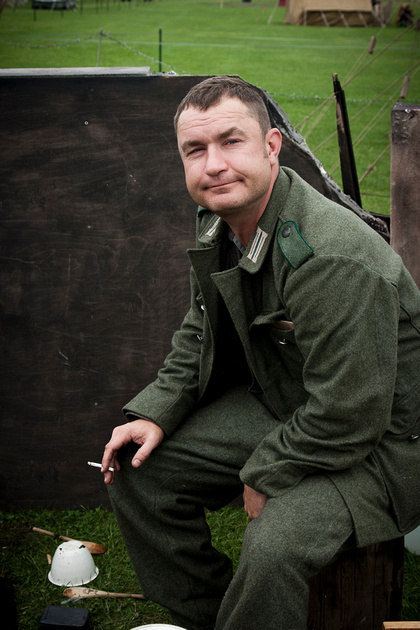 I could tell straight away that Matthew Connelly was no "sandgrownun," and indeed, he confessed as much himself! Matthew is a first time reenacter from Glasgow who was coerced into participating by his brother-in-law, John Lister. According to Matthew, he is enjoying the experience fully, and I must say, he certainly seems right at home in his uniform, sitting around a campfire and smoking a cigarette! 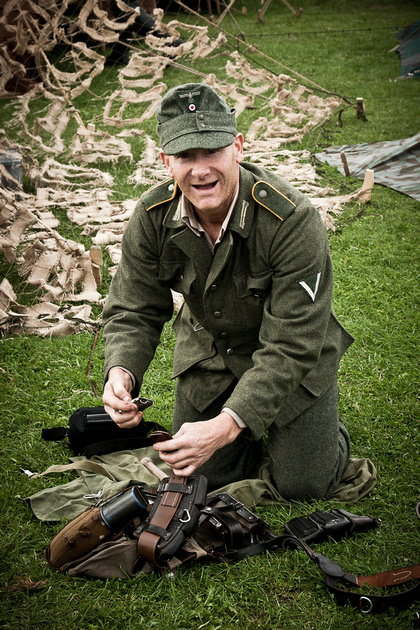 The next soldier reenacter I met was Keith Gilbert, clearly very practiced at these events, and busily packing up his gear in preparation of the "battle" ahead! Keith also acted as chef for the rest of the division. In fact, he offered me some very delicious-looking, heavenly-smelling sausages that I foolishly turned down. 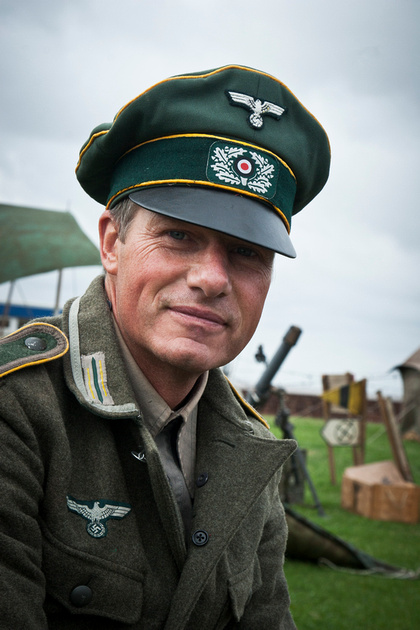 The last member of the division to come out of the tent was John Lister, looking very dashing in his uniform. He didn't have much to say...I think he was on reconnaissance for coffee!

It is evident that most of these men enjoy being part of the reenactments simply because they are passionate about experiencing this era in our history, and they want to share it with others. Watching them sit around the campfire with each other, however, I have a sneaky suspicion that they also quite like playing at war. Either way, isn't it a fascinating way to dust off the history books and personalise the past!

As I walked back home, I couldn't help thinking how hungry I was...I'm still kicking myself for turning down a campfire-cooked breakfast!

If you want more information on World War II Reenactment Organisations, check out this website dedicated to the many groups that participate.  Find a group and become a future storyteller about the past http://www.clash-of-steel.com/directory/links_groups.php?cat=ww2.

Have a great week everyone and thanks for stopping by!  If you have anything about World War II or reenactments that you would like to share, please do!  I welcome all comments!